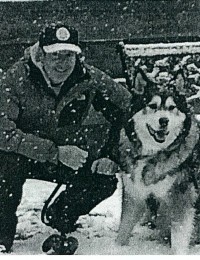 After graduation, he completed a private practice Internship and spent 18 years in clinical practice where he treated small animal and equine patients in New England and Virginia.

When not working, Dr. Bartlett is an avid runner who has completed 3 Marine Corp and 3 Boston Marathons along with many other distances. He can sometimes be seen running with one of his dogs (a German shepherd) rescue) on the Warrenton Greenway. The other, a 135lb Malamute rescue who is built more for pulling, tends to like to conserve his energy and rest at home. Rounding out the animal family, he also has a retired Morgan/Welsh mare that he has had since Vet school. During school, he was also able to supplement his tuition by working as a horse show groom. While he originally grew up in snow country, Dr. Bartlett is a Warrenton resident with ties to the Washington DC area as his father was a US Marine stationed at Quantico and Marine Base DC. One of his most memorable recent adventures was to participate as volunteer at the Iditarod Sled Dog race in Alaska, which also helped develop his interest in the canine athlete and sports medicine. He has been a volunteer at the Fauquier SPCA feral cat spay/neuter clinic and he still serves as the veterinarian for the Warrenton and the Upperville horse shows.